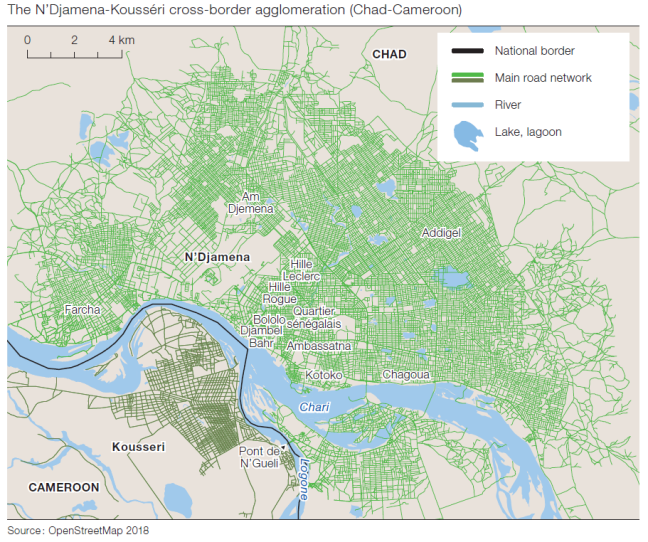 The OECD just released a series of four papers on West African border cities. These papers are part of the “Cities and Borders” project that my colleague Leonardo A. Villalón and I coordinated from 2017-2018 in the region.

The papers provide a systematic analysis of the role West African border cities play in the process of regional integration. Based on a multidimensional mapping of 18 countries, they analyze the local dynamics that have developed in urban areas, the impact distance has on national cohesion and the impact territorial divisions have at the international level.

At the local level, the study of demographic and morphological changes identifies the effects density has on border cities. It shows that since 1950, the growth of border cities has almost always been greater than that of other cities in the region. This rapid growth has been especially visible within 50 km of national borders, where the most dynamic markets are located. Our work also confirms that border cities emerged without a concerted development plan and remain very dependent on each other.

At the national level, we studies the impact of distance on health services and formal businesses. Our work shows that the potential of harmonizing the health policies of the different countries has been largely untapped. The mapping of formal businesses specializing in certain sectors of strategic importance to regional integration shows that most are located in political and/or economic capitals where decisions are made concerning customs policies as well as import/re‑export strategies, and where major transportation and communications infrastructure is located. The lack of public investment in health services as well as roadway and education infrastructure in border regions can potentially pose major problems for national cohesion.

At the international level, we looked at the effects of territorial divisions using an accessibility model. The results show that the population base for border cities could be 14% larger if border crossings did not impact the flow of goods and people and 12 to 50% larger without roadside checkpoints. Between Benin, Niger and Nigeria, an analysis of the condition of the road network shows that the combined population base of eight border cities would increase by one third if there were no waiting at the borders. An exhaustive list of adjacent border posts in place or planned by national governments or regional organisations throughout sub-Saharan Africa further shows that trade facilitation runs up against the special interests of public servants and private-sector actors making a living from regional integration frictions. In West Africa in particular, few states are now able to benefit from the newly built border post structures in the region, most of which are not operational.