In recent years, large-scale research programs, such as BIG or AFRIGOS, have been launched in different parts of the world to examine border conflicts, cross-border cooperation, regional trade, or transnational migration. We, border scholars, travel more, meet more people at exciting conferences, and submit more proposals. But when it comes to publishing, we still write alone. In our own country.

This phenomenon is of course not happening only in border studies. In a recent paper, Cerina et al. (2014) show for example that connectivity between scientists decays exponentially in Europe due to the existence of national communities of inventors, and as a power of distance in the borderless market of the United States. Internal divisions within border studies are however no small paradox for a science supposedly cross-border by nature. They also have been relatively little studied to date.

Less than half of the papers published in the Journal of Borderlands Studies (JBS), our flagship journal, have one or more coauthors. And this has not really changed over the last decade. Actually, the peak in co-authorship was reached more than 15 years ago, as can be seen from the graph below.

Because JBS is the primary publication of the Association of Borderlands Studies (ABS), founded in 1976 to study the United States-Mexico borderlands, US border scholars have enjoyed a dominant position in the journal. More than half of the papers ever co-published in JBS have been written by scholars affiliated with a United States institution. As can be seen below, those affiliated with a German, Mexican or Dutch institution each represent around 5% of the papers co-published since its creation. 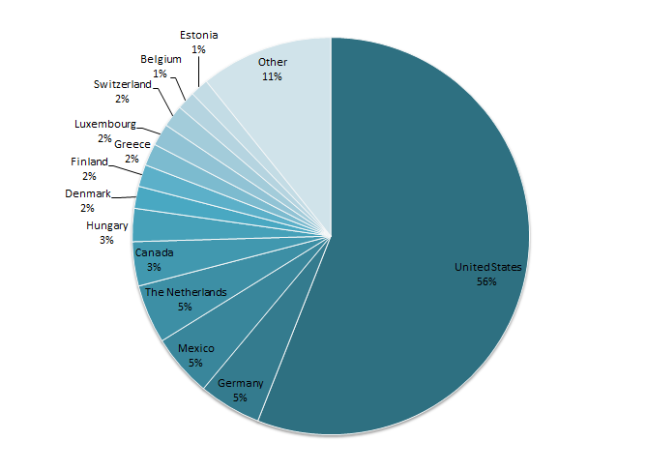 The first paper co-authored by a non-US scholar was published by Joan Anderson of the University of San Diego and Martin de la Rosa of the National Autonomous University of Mexico in 1991. It took JBS four more years to publish a paper whose co-authors were not affiliated with a North American institution.

Another way to look at how integrated border scholars are is to map who has published with whom in JBS since the creation of the journal in 1986. The sociogram below clearly shows how fragmented our community is when it comes to co-publishing. Instead of a fully integrated community, we form a fragmented network building on lots of dyads and triads. Despite the current internationalization of border studies, the main components of the network are still located in the United States (in red), and, secondarily, in Germany, Mexico, the Netherlands, and Canada.

Not only do we often publish alone: we also predominantly publish within our own country. Cross-border co-authored papers are the exception in our field, as can be seen from the sociogram below, in which only the papers published by two or more authors located in different countries have been represented. 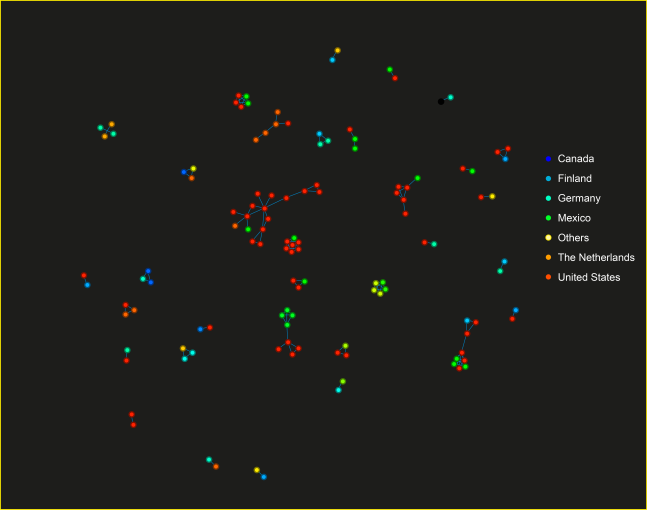